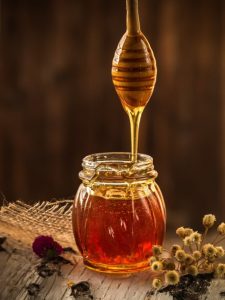 A legal joust between Australia and New Zealand over the right to sell Manuka honey reached a sticky end late last year with the UK Intellectual Property Office  throwing out an application for trademark made by a group of Kiwi honey producers.

The high priced nectar has been the subject of highly expensive legal dispute for the last five years as a result of the New Zealand producers, represented by the Manuka Honey Appellation Society, seeking a trademark of the words “Manuka Honey”, based on claim that the term is of Māori origin and that it’s most authentic and guaranteed source can only be procured in New Zealand.

The Australian Manuka Honey Industry disputed the Kiwi claim, saying that the plant from which it is derived, Leptospermum Scoparium, flourishes in both NZ and Australia and cannot reasonably be described as an exclusively Kiwi product.

Over 5000 pages of information was gathered by the Australian Manuka Honey Industry in this hard-fought legal case, such was the importance due to the New Zealand Honey Industry seeking to trademark in multiple major manuka-importing counties including the USA, the United Kingdom, Europe and China.

If the NZ legal claim had succeeded, the result would have been catastrophic for the Australian Manuka producers because it would have meant that they were unable to use the term “Manuka” to describe their honey.  The market for this desirable type of honey will be approximately $1.2 Billion globally by 2027.

The UK Ruling made on 15 December, 2021 was based on a conclusion that although the honey product clearly derived from the Māori word “Manuka”, it did not prevent the phrase “entering the English language as a descriptive word” and there was no persuasive evidence to suggest the public “understand that it (the honey) exclusively originates from New Zealand.”

Manuka honey is made when bees forage the Leptospermum Tea Tree plant, which is called “Manuka” in Māori.   That said, Leptospermum plants are native to both Australia and New Zealand.  In fact, Australia is home to 85 of the 87 known Leptospermum species worldwide.    Historians also indicate that the name “Manuka” has been used to describe the tree in Tasmania, Australia, since the 1800’s.

Interestingly, honey is the subject of a separate, massive legal fight in the USA.   Thousands of commercial beekeepers in the USA have taken legal action against the country’s largest honey importers and packers for allegedly flooding the market with hundreds of thousands of tonnes of counterfeit honey (based on fake honey from Asia).  Honey is understood to be the most adulterated food after milk and olive oil.

Between 2007 and 2019, there was a 128% increase in Asian honey exports worldwide even though the number of hives has only risen slightly and honey yields have fallen due to threats to bees from pesticides, poor nutrition and parasitic mites. The Honey Authenticity Project estimates that about a third of worldwide honey imports could be counterfeit!

The state of the honey market worldwide makes us think about the authenticity of what we are spreading on our toast and using in cooking.

Makes you wonder whether we are still able to declare, “Honey, you’re the bee knees”.

Mitchell leads the Personal Injury department and is a Partner of MBA Lawyers.

His caring personality matched with his attention-to-detail style, is a winning combination in supporting accident victims and their families.

Contact our team today to have your legal questions answered.